Great news! Happy Like Soccer has been nominated for the Amelia Bloomer 2013 Project List. What exactly is this list you ask? Here's a description straight from their blog:

We create an annual booklist of the best feminist books for young readers, ages birth through 18. We are part of the Feminist Task Force of the Social Responsibilities Round Table of the American Library Association. 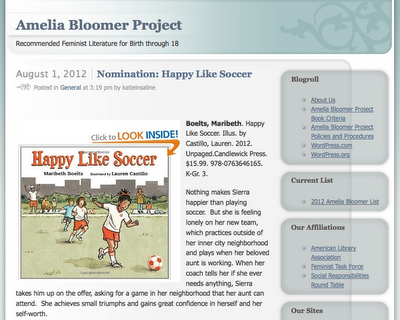 Awesome! Thanks so much for the nomination~

I also wanted to thank this handful of wonderful bloggers who had such kind things to say about our book:

"I'm using this story to validate children who might not be living with their parents and to teach other kids that all families have a different make up. What a great new book!"

"One of the most important skills for girls to learn is self-advocacy. For Sierra, the desire to join the two things she loves most – family and soccer – helps her speak up for herself. Author, Maribeth Boelts, and illustrator, Lauren Castillo, are perfectly paired in Happy Like Soccer. The inviting call and response of words and pictures bring both the light and shadows of Sierra’s story to life."

“Happy Like Soccer  is a story about the joy of family support. It also shows how empowering and wonderful it can feel to figure out a solution to a problem instead of succumbing to despair."

"Sometimes words are not enough to describe beauty and excellence. That is the case with this book."

"A lovely story extolling the virtues of family and resolution, this story with its bold, seemingly simple drawing style will appeal to many children. All of those who love soccer will be absorbed while those who live in the city and know the problems of getting a spare space to play in will also read it with pleasure. "

"A celebration of a small family, an urban community and sports, this picture book glows with love."

"This is a book that should be a must on every classroom bookshelf."

"With honesty and rare subtlety, author Maribeth Boelts and illustrator Lauren Castillo portray an endearing character in a moving, uplifting story that touches on the divides children navigate every day- and remind us that everyone needs someone to cheer them on from the sidelines."

"I really liked the message in this story. It presents the challenges that a working single guardian faces in order to attend the Saturday soccer games of her niece."

"Several years ago, Maribeth (Boelts) brought together all kinds of elementary school kids, teachers, coaches, and volunteers to take part in some soccer. My first two children were born during this time (I remember running around on the field with a pregnant belly!), and the fruit from those few seasons of soccer continues to grow in the lives of many."

Hooray for Happy Like Soccer! And thanks again to Maribeth Boelts for writing such a fantastic, important text for children :)

A few years ago my brother moved to an apartment near the north section of Central Park in Manhattan. He encountered raccoons many nights on his way home — crawling down tree trunks, or peering out of trash cans. And sometimes they'd actually follow him down the sidewalk toward his building. It was quite creepy, he said, to see glowing eyes watching as he made his way through the darkness (Around this same time, the New York Times wrote an article addressing those nervy NYC raccoons). I, of course, found the visual of my brother being followed by these guys hilarious, and so began my raccoon research — something about this needed to be in a children's book!

While searching the web for raccoon inspiration I came across this hysterical video which sparked a story idea that, after several rewrites and edits, became The Troublemaker~


The Troublemaker involves one rascally boy, and one very sneaky raccoon. I am working on the final art for the book right now, and cannot wait till it is out in the world next fall (Clarion Books)! 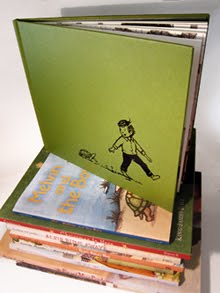 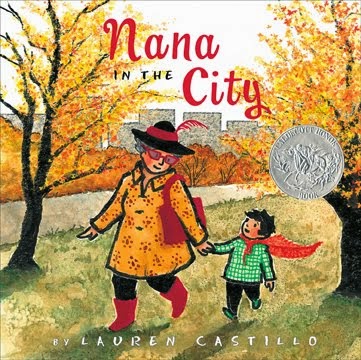 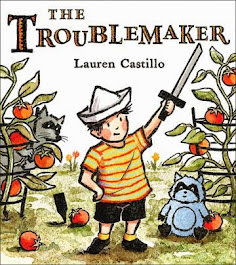 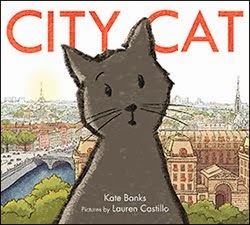 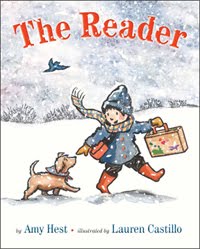 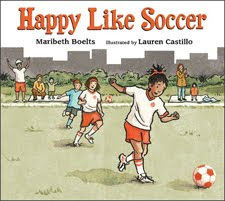 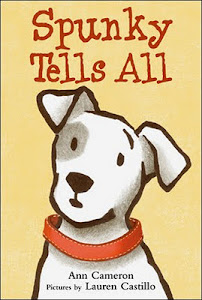 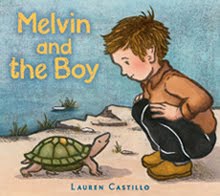 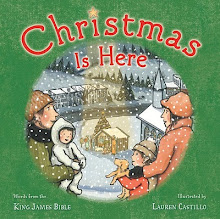 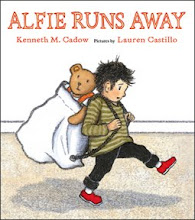 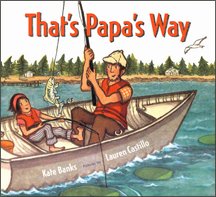 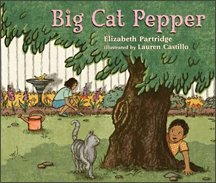 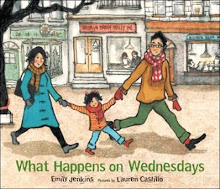 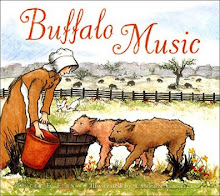 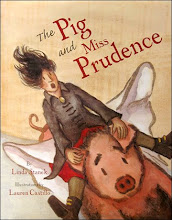